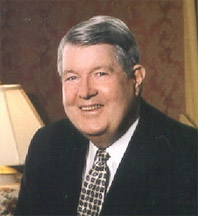 Harold H. Hogg, 86, of Naples, FL went to be with his Lord on June 3, 2014 after a brief illness. He was the husband of Ruth (Haigh) Hogg for 64 years. He was born on June 9, 1927 to the late Dr. William L. Hogg and Mildred R. Hogg in Leechburg, PA. Harold graduated from Edgewood High School, Pittsburgh, PA in 1945 and graduated from Duke University in 1948. He attended Yale Divinity School for post-graduate work, then managed Whitlock’s Book Store in New Haven, CT. He and Ruth were married at Advent Lutheran Church in York, PA in 1949. In 1951 they moved to York, PA where Harold worked construction for developer Paul Binder and completed the Construction curriculum at Penn State York. In 1952 Harold pursued his entrepreneurial passion and started his own construction company. He began as a homebuilder, and Harold H. Hogg, Inc. eventually became a leader in commercial construction in south central PA and central MD. The company name changed to Hogg Construction in 1995 when his son James Hogg purchased the business.

Starting in the 1970’s, Harold led investment groups that purchased commercial properties including, among others, Northgate Shopping Center in York, PA, Clearview Shopping Center in Hanover, PA, and the original Hungerford factory in Shrewsbury, PA that later became Shrewsbury Courtyards senior apartments. In 1992 he led the development of what is now the Holiday Inn Express hotel on Leader Heights Road in York, PA, and in 1997 he acquired and rebranded the Quality Inn Ocean Palms beachfront hotel in Daytona Beach Shores, FL. Harold’s properties became the first clients and enabled his son David Hogg to start Springwood Real Estate Services and Springwood Hospitality in York, PA in 1996.

An undergraduate philosophy major, Harold lived a life inspired by Pericles, “What you leave behind is not what is engraved in stone monuments, but what is woven into the lives of others.” Harold served as an elder in the First Presbyterian Church in York, PA, Chair of the Scholarship Committee (for students at Palm Beach Atlantic University) at Royal Poinciana Chapel in Palm Beach, FL, member of the National Insurance Board of Trustees of Associated Builders & Contractors, and Beam Club member of the Keystone Chapter of Associated Builders & Contractors. Harold created and endowed the Hogg Family Chair in Engineering Management and Entrepreneurship at Duke University; he established the William L. Hogg Fund to benefit Jumonville Christian camp (founded by Harold’s father) in Hopwood, PA; and he established two private family foundations to serve Christian and secular not-for-profit organizations in the local communities where his surviving descendants live and work.

In addition to his wife, Ruth, he is survived by two sons who inherited his entrepreneurial spirit, James and his wife Patricia (Krall), and David and his wife Barbara (Bentz), and by four young men of extraordinary character he was blessed to call his grandsons Andrew and his wife Victoria (Schmidt), Stephen and his wife Sarah (Foard), Michael and Matthew, and by four precious great-granddaughters Ella, Sophia, Ava and Madeline.

A memorial service will be held Thursday, June 12, 2014 at 3:00 pm at Advent Lutheran Church, 1775 E. Market Street, York, PA with Pastor Ken Mahanes of Palm Beach Atlantic University and Pastor David L. Ritterpusch officiating. Visitation will be held from 2:00 pm to 3:00 pm at Owens Hall in the church. In lieu of flowers, memorial donations may be made to the Leukemia & Lymphoma Society (www.lls.org) or to the Palm Beach Atlantic University Annual Scholarship Fund (www.pba.edu/annual-scholarship).