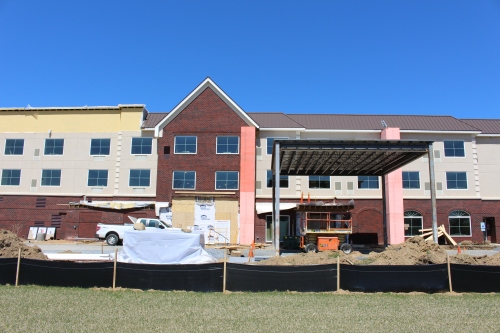 Concord Hospitality Enterprises announced on Monday the sale of 13 select-service U.S. hotels to an undisclosed “global investment fund” for approximately $240 million in an all-cash transaction.

“This sale is a continuation of our on-going plan to strategically sell stabilized assets while retaining management,” said Mark Laport, president and CEO of Concord Hospitality. “This gives our investors an attractive return on their development investment while providing long-term, sustainable growth opportunities for the companies that buy these assets.”

The Hampton Inn & Suites in York Township includes an indoor pool. Soon, a bank and a restaurant are likely to open locations on the property.

David Hogg is the first to admit that building the new Hampton Inn & Suites in York Township wasn’t easy. From site access problems to higher-than-expected development costs, the project overcame more than a few obstacles before the hotel opened its doors in March, said Hogg, CEO of Springwood Hospitality. The property at 2159 S. Queen St. is owned by a partnership that is partially owned and managed by Springwood Hospitality.

Despite the challenges of the project, Hogg said he knew the area was ready for a new hotel. “What we are seeing happening in the hotel market is that there are brands that are losing their appeal,” he said. “We made a conscious effort to put this hotel in an area that we can be dominte.”

“I believe that when new properties come on the market, it raises the bar for many of the existing hotels,” said Anne Druck, president of the York County Convention and Visitors Bureau. But to come on the market, some hotel projects have had to jump some hurdles.

In the case of the Hampton Inn, the developers had to deal with access issues that dated back to before the property was home to the now closed Wright Bros. Lincoln Mercury dealership, Hogg said. “Being so close to I-83 and York, it’s the best site for a hotel in York County,” Hogg said. “But we had to solve the access problem. That’s why the dealership didn’t make it.”

To tackle the entrance and exit issues, Hogg’s company elected to demolish the closed Make Believin’ costume store and Big Boys Toys in favor of an entrance to the hotel from Pauline Drive. In addition, the company added an entrance from South Queen Street that partially cuts through a nearby gas station, Hogg said.

Another challenge for the project was expense. Developers ended up having to take on more storm-water management work than initially anticipated, Hogg said. “Our development costs went significantly over budget,” he said. “We had to do some utility line relocations that we didn’t foresee.” There are plans to lease two pad sites at the hotel that will help cover those costs, Hogg said.

Another element that helped make the project work was the cooperation of York Township. The municipality agreed to an incentive program in which taxes on improvements made to the property would be phased in over 10 years. “It made the numbers work, even though the property was expensive,” Hogg said.