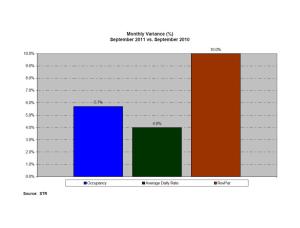 Here are some excerpts from an October 20th 2011 article by Rachael Spann Urie,  Director, Public Relations of STR, that appeared in HotelNewsNow.com.  The big news she points out is that the U.S. hotel industry RevPAR in September 2011 grew 10% over September 2010: